Elizabeth Bowes-Lyon, wife of King George VI of England, became Patroness of Queens' College in 1948 to mark the quincentenary of the College's foundation. 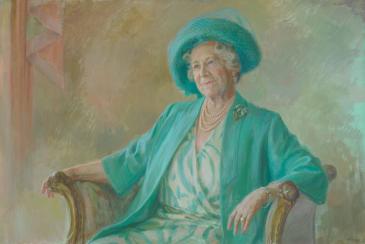 This portrait was painted by June Mendoza in 1989: it hangs in the Senior Combination Room.

The most recent court of the College, completed in 1990, was named Lyon Court in her honour.

On the occasion of her 100th birthday on 2000 August 4th, the College sent this greeting: