John Eatwell, President of Queens', was admitted as an Honorary Fellow of the College on Monday evening. Traditionally, the President of Queens' is not a Fellow, but Lord Eatwell's admission as an Honorary Fellow follows the precedent of previous Presidents, including Sir Arthur Armitage and the Revd Canon John Polkinghorne, and means that he will be a member of the Fellowship following his retirement as President at the end of this academic year. 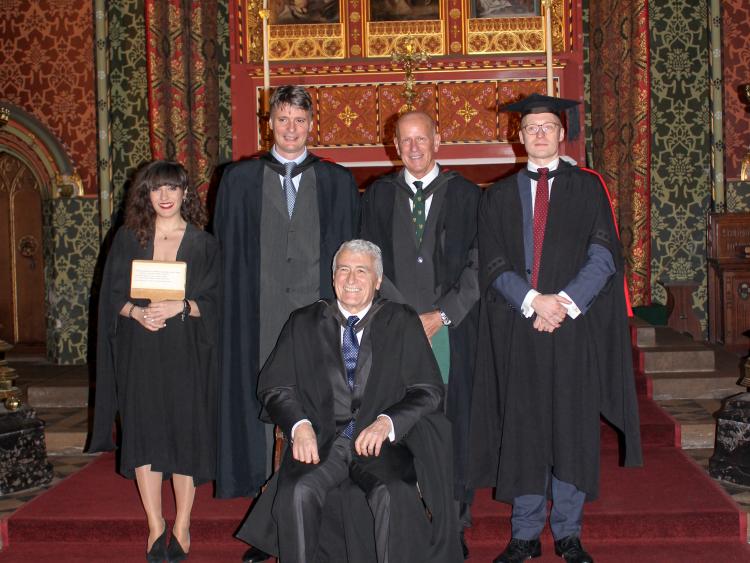 Lord Eatwell was elected to an Honorary Fellowship at the Governing Body meeting on Monday morning, following which he was admitted in the evening in a short ceremony before the Leman Dinner in College. Also elected and admitted was Professor Neil Lawrence, who became a Professorial Fellow of the College following his appointment as the DeepMind Professor of Machine Learning at the Cambridge University Department of Computer Science and Technology last year. This Fellowship has been sponsored by a generous benefaction from DeepMind, the artificial intelligence company founded by Queens' alumnus Dr Demis Hassabis CBE (1994).

Dr Cristina Peñasco acted as "Junior Fellow" for the ceremony as the most recently-admitted member to the Fellowship. She is now a Bye-Fellow having previously been a Postdoctoral Research Associate at Queens'. Dr Peñasco has been promoted to a University Lectureship in public policy at POLIS. At the Cambridge Centre for Environment, Energy and Natural Resource Governance, Cristina's research brings together multidisciplinary research in environmental economics, innovation policy and energy economics in green and energy efficiency technologies.

The Honorary Fellowship for Lord Eatwell marks his distinguished Presidency of the College over the last 23 years. To thank him for his service and ensure that his name is enshrined at the College in perpetuity, we are currently fundraising for The John Eatwell Fellowship, a full College Teaching Officer position without a subject bias to support Queens' teaching where it is most needed.