Date for the diary: 'The Rabbi & the English Scholar' exhibition in the library 22 Feb - 24 March

The Rabbi and the English Scholar: An Exhibition of Jewish Thought in Renaissance Cambridge at Queens’ College Library. 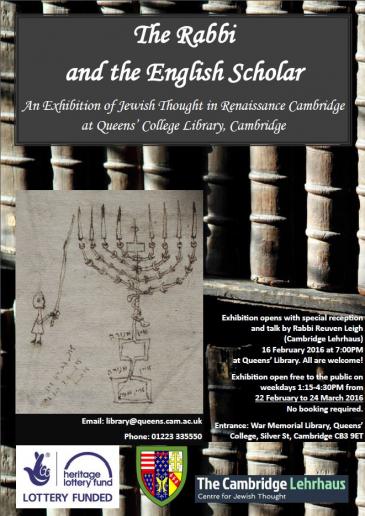 This exhibition reveals the influence of Jewish thought on Cambridge scholars of the Renaissance period and after, as witnessed by rare book collections in Queens’ Old Library. Showcased items will range from the earliest printed Hebrew Bibles to Isaac Newton’s published investigations into the biblical past. Come discover a controversial and significant era of Jewish-Christian dialogue which left its mark on Cambridge in the sixteenth century and after.