Two Organ Scholars work with Ralph Allwood and the Chaplain to organise and deliver all the music in Chapel.  Beyond playing the organ and often conducting services, the Organ Scholars oversee the administration of the choir (with the Choir Administrator), including the selection of music, and the planning of concerts, tours and other events.

The 2021 Organ Scholars have been announced: 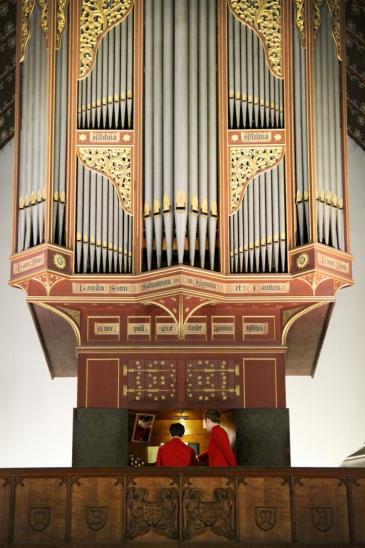 The Organ Scholars are provided with special subsidised rooms in College, as well as with University network phones, internet and pianos.  The Senior Organ Scholar occupies some of the finest accommodation in the College, with a set of seventeenth-century rooms adjacent to the Chapel.

The Organ Scholars are central to the music-making at Queens’, and often conduct the MagSoc Symphony Orchestra and Chorus.  Former Organ Scholars include the composer Charles Villiers Stanford (1870–72), the internationally renowned symphonic and operatic conductor Richard Hickox (1967–70), and in more recent times Alexander Berry (Director of Music, Bradford Cathedral) and Samuel Hayes (Director of Music, the University Church of Great St. Mary’s).

The Organ Scholars also traditionally oversee an organ recital series throughout the year, including other Cambridge Organ Scholars, cathedral organists and international recitalists.

If you are interested in learning more about becoming an Organ Scholar here at Queens’, please contact the Senior Organ Scholar, Ben Markovic, or Ralph Allwood.

There are also online listings for the current organ recital series in Queens’ College Chapel.